From my young days, our family played table tennis almost daily at home as we had a spacious room and a table tennis table. Due to this reason, when each of us (Marie, Nimal, Srini, myself and Iromi) entered the University, we were able to play in the University team. We also regularly played badminton outdoors as I had laid out a badminton court on our lawn.

I also managed to Captain the Jayathilaka Hall team in Table Tennis at the University of Ceylon, Peradeniya and also went daily to the gymnasium to play Table Tennis.  When TT tables were not available, I also regularly played badminton in the gymnasium.

At a later date, I also captained the St Anselm  Hall team in Table Tennis during my postgraduate studies in Manchester, England.  While there, I also regularly played Snooker and Bridge in the Hall.

THE year 1968/69 has been a very successful one, to judge from the achievements and enthusiasm of the Table-Tennis Team. The keenness shown by the freshmen is most heartening, and it is hoped that their enthusiasm will be maintained.

We had a record number of entries for the annual Peradeniya Championship and we congratulate Ayal Jayatilaka on winning the coveted triple-crown. In addition to the normal tournaments, the following were introduced in the year under review:- Fresher's Inter-Hall, Fresher's Knock-out, Seniors vs Freshers, Inter-Faculty and Staff vs Students. In the All-Island Inter-Club knock-out Tournament, we reached the semi-finals and were beaten by the strong "Y" Team, which went on to win the tournament. We have also entered the Inter-Club League Tournament which is now in progress. In the Colombo-Peradeniya Duel, we lost by a solitary match (4-5): and again in the Inter-Varsity Tournament we were outplayed by Colombo by 3 matches to 4. We take this opportunity to thank The Honorary Secretary of the T T Association of Ceylon Mr R Kulasingham for his kind co-operation in our dealings with the association. Finally, our thanks are due to the D P E and his staff for their assistance.
Captain: S Kumarasinghe       Vice-Captain: A Jayatilaka       Secretary: I P Gnanachandran

There has been a lack of enthusiasm in Table Tennis within the hall during the past year. One of the main reasons for this was the absence of a table tennis room. The fact that the dining hall had to be cleared and the table tennis table moved in, if one required to play Table Tennis, discouraged many a player. In this respect I am glad to say that as a fluorescent tube has now been fitted in the basement, it is possible to play tale tennis there at any thme rest. The defeats were due mainly to the non-attendance of some of the playas at practice, and the players not being available for most of the matches due to one reason or another. Due to the recent power cuts, most of the matches had to be postponed time and again, till it was almost the end of term, and most of the students were piled up with lots of work. For this reason we were only able to field greatly weakened teams against some of the halls.

An internal tournament has now been organised. Here too there were only twelve entries. But it is to be hoped that as, more people realise table tennis is easily available in the basement, there will be much greater participation.

This academic year, a lot of enthusiasm has been shown in Table Tennis, especialty by the new comers to hall, a fact that has shown itself in the performance of the team throughout these first two terms. We were also very fortunate in having a Northern Ireland Schoolboy International Player in our hall team. During the first term a knock-out Table Tennis Tournament was organised, and completed. This event attracted 40 players and enabled a proper selection of the hall team to be carried out. Also, due to the interest shown a second knock-out Tournament was organised during the latter part of the second Term in whitch players who represented the hail regularly at this sport were not allowed to compete. This Tournament too had a good response collecting 32 entries. During this term a League Tournament was also organised for the top Players in hail. It is hoped that these 2 latter tournaments will be completed by the beginning of the Lent term.
So far this year, 13 games have been organised. One of these matches was cancelled and another postponed. Of the games actually played, we drew only with a strong Hulme side and won the rest, some of them quite convincingly. Except in the Stopford Cup games, the team were chosen so as to obtain an active participation of many of the players. In the Stoptord Cup games in Tbele Tennis we tied with Hulme for the top position.
Finally I wish to record my appreciation for the genuine interest shown thiroughout the year.

Certificates of achievement in Table Tennis  at Peradniya 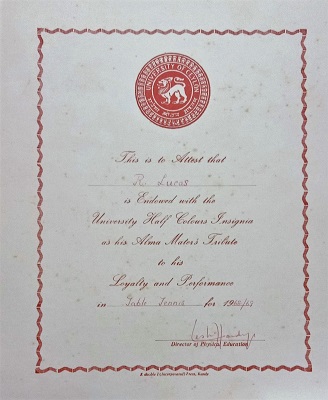 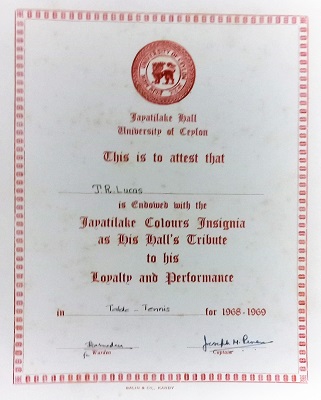 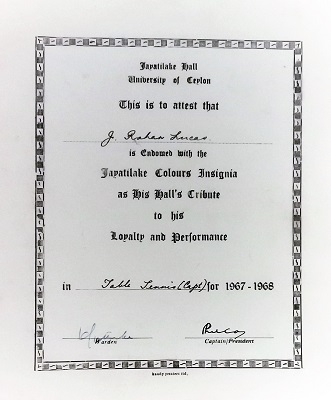 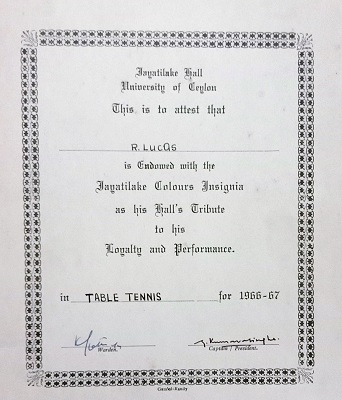 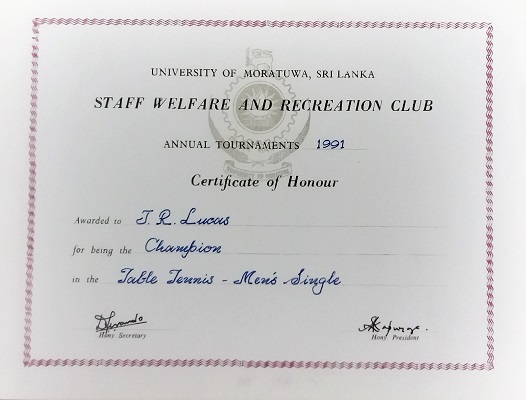 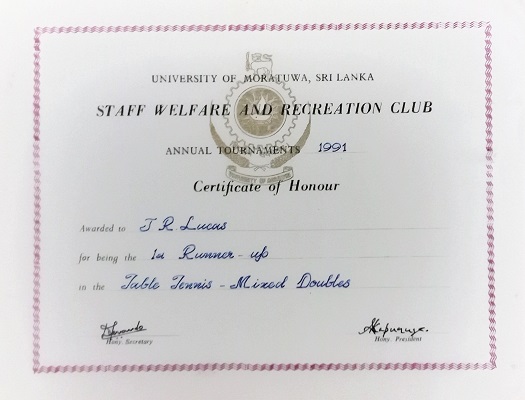 Certificates of achievement in Cricket and Tennis  at Jayatilaka Hall, University of Ceylon, Peradeniya. 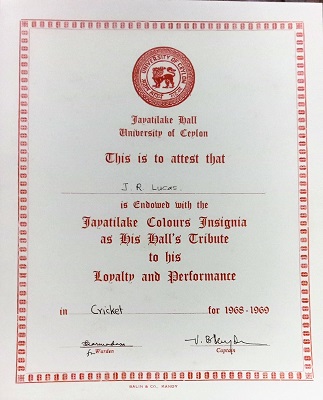 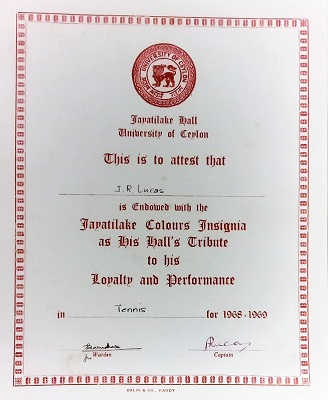